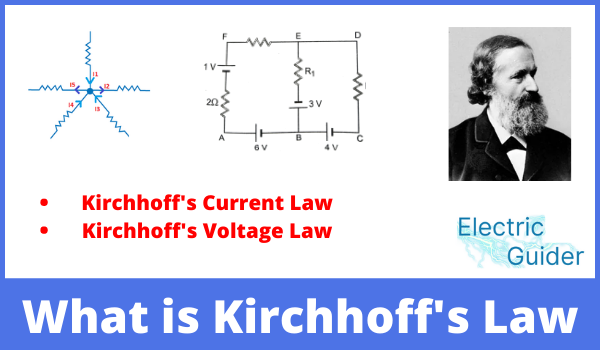 What is Kirchhoff’s law, first law is of current and second of voltage and when it is given junction or junction, loop, branch or branch. To understand Kirchhoff’s first law, first you have to understand three things, junction and branch. You can read the definition of all of them below.

Kirchhoff was a German physicist who, in 1842, scientist Kirchhoff was doing some electrical experiments. Scientist Kirchhoff gave two rules for the analysis of electric circuits, which are applicable in all types of electrical networks, these laws show the conservation of charge and energy, with the help of which we can set up electric nets in any configuration. In fact, Kirchhoff’s first and second laws are based on Ohm’s law or it can be said that it is an application of Ohm’s law designed to solve complex circuits. .

What is Kirchhoff’s Laws

In electrical circuits, sometimes many resistors and cells are connected in a complex manner. The formulas we have derived earlier for series and side connections are not always sufficient for all electric currents and potential differences in a circuit. Two laws, which are called Kirkhoff’s laws. Different types of DC A scientist named Kirchhoff has established two rules for circuits, they are as follows 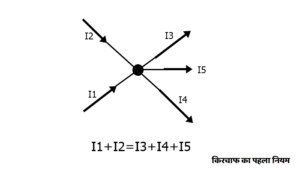 Thus it is clear from the equation that the sum of all the currents coming towards a junction is equal to the sum of all the currents going away from that junction. In other words, when a constant current flows through a circuit, charge is neither accumulated nor removed from any junction in the circuit, i.e. Kirchhoff’s law is based on the principle of conservation of charge, it is called Kirchhoff’s current. it is said. Also called rule.

In other words, Kirchhoff’s potential law is applied inside a loop, in which the carrying force applied in any closed circuit is equal to the algebraic sum of the potentials of the components present in the circuit, that is, the algebraic sum of the potential differences of the components in a closed circuit is zero. Kirchhoff’s law is used to determine the value of current in mixed type circuits. Kirchhoff’s second law is based on conservation of energy, it is also called Kirchhoff’s law of voltage.

The following rules are kept in mind while making calculations- 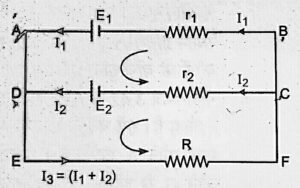 Let us understand this with an example, suppose there is an electric circuit in the given figure, in which current is flowing through external resistance R by connecting cells having E₁ or E₂ respectively in parallel and the internal resistance of these cells is r₁V.

Now in the circuit ADCBA according to Kirchhoff’s second law,

and in the circuit CDEFC,

According to Kirchhoff’s second law in a circuit AEFBA,

Quetions- Find the value of i3 in the given circuit –

SOL. Apply Kirchhoff’s law of current at the given node.

Question-1 On what quantity is the conservation of Kirchhoff’s second law for an electric circuit based?

Answer: Law of Conservation of Energy

Answer- You can neither create nor destroy charge, this charge is inherently free and can be transferred from one place to another.

Ans- A closed circuit in which no element/element occurs more than once.

The north-branch connects the two junctions and the value of the current remains unchanged.

Answer- The point where three or more paths meet. It is called joint/junction/node.