Hello friends, today I am going to tell you What is Alternating Current ?, Defination, Advantages, advantages of Alternating current (AC), Terms and definitions of alternating current: If you also want to know, then keep reading this article completely. 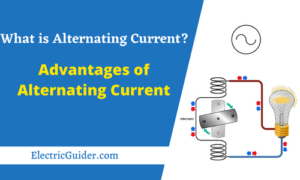 What is Alternating Current ?

(a) Alternating Current Cycle: A complete change in the value and direction of alternating current is called a cycle. The positive and negative wave of an alternating quantity (voltage or current) is called a cycle. Each complete bicycle is made in 360° electrical. The wave moves from zero to the maximum reaching zero and reaches zero from the highest value forming a positive wave. The complete wave cycle thus formed is

(b) Frequency of alternating current: The number of cycles made in one second in alternating current is called frequency. In other words frequency = number of pairs of poles : speed (in rotations per second) or f = Pxn cycle seconds. The number of cycles made in one second is a. The frequency of C is called. If an alternator has two poles, then a cycle will be generated in it in one round of the coil. When the machine has a pair of poles, a P cycle will be generated in each revolution. If the alternator rotates at N revolutions per second, it will generate PxN cycles per second. This is called frequency.

(c) Alternating Current Lagging : If the current lags behind the voltage i.e. it reaches its maximum value later than the voltage then it is said that the current is leading and the voltage is lagging. Is . Often the capacitance occurs in circuits such as capacitors etc.

(d) Sine Wave of Alternating Current : It is AC at any instant. Displays the value and direction of . To draw this curve, a graph is drawn between the successive instantaneous values ​​of current and voltage. AC at any moment. or e.m.f. Their values ​​are called their instantaneous values. To achieve these, a coil is rotated at a uniform speed in a uniform magnetic field.

(e) Phase of Alternating Current: The word phase is used for coiling and it also shows the relationship between voltage and current in an alternating circuit or device.

(f) Single phase of alternating current : This shows whether the machine is properly connected or not, then there is only one set of coils i.e. the current in it has only one path to the capacitor.

(g) Poly phase of alternating current: It represents a system of two or more phases.

(j) Out of phase of alternating current: When two alternating quantities do not give their maximum and minimum values ​​at the same time and in the same direction, then those quantities are called out of phase.