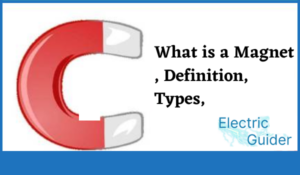 What is a Magnet

Following properties are found in magnets-

(i) It attracts iron filings towards itself. Those two parts of the magnet, where most of the iron filings stick, are called poles.

(ii) A freely suspended magnet stays in the north-south direction. The north finding end of a magnet is called the north pole and the south pole. Due to this directional property of the magnet, it is also called the leading stone or load stone.

(iii) There is repulsion at the like poles of two magnets and attraction at the opposite poles.

(iv) If a magnet is repeatedly rubbed on an iron rod, it also becomes a magnet.

(v) When a magnet is heated red and cooled down, its magnetization decreases or ends.

We know that every substance is made up of tiny particles called molecules. Molecules of some substances behave as independent magnets. In the normal state, these molecules are randomly scattered in matter and they neutralize each other’s effect. As a result, the general picture: 1 In the magnetized and demagnetized states of iron, matter does not have magnetism. When the external magnetic field starts acting on the material, then its molecular magnets start getting arranged in the direction of the magnetic field. When all the molecules are arranged in the direction of the magnetic field, the substance becomes a magnet.
The magnetic property present in molecules arises due to the orbital and spin motion of the electrons present in its atoms. This is called the molecular theory of magnets.

Magnets can be classified into the following two main categories.

(a) Natural magnet
(b) Artificial magnet

1. Natural Magnet : Magnetite stone found in nature is called natural magnet. Its shape is irregular and its magnetic field intensity is also very low. Now they are no longer used.

(i) Permanent : There are permanent magnets whose magnetism remains for many years. These are made of steel or alloys of magnetic metals. The alloying metals are made by mixing aluminum, nickel, iron, copper and cobalt in the ratio 8:14:15:3:24. It is called Alnico or Alconex. In the beginning, magnets were made by the ‘frictional action’ of the magnet on the iron rod, but nowadays the rods of steel or alloys are in the shape of a cylindrical or horseshoe shape, in the middle of a coil carrying a strong current.

(ii) Temporary: Electromagnets made of soft iron are called temporary magnets. These are made in many sizes as per the requirement. The magnetism of a temporary magnet exists only as long as current flows through its coil.